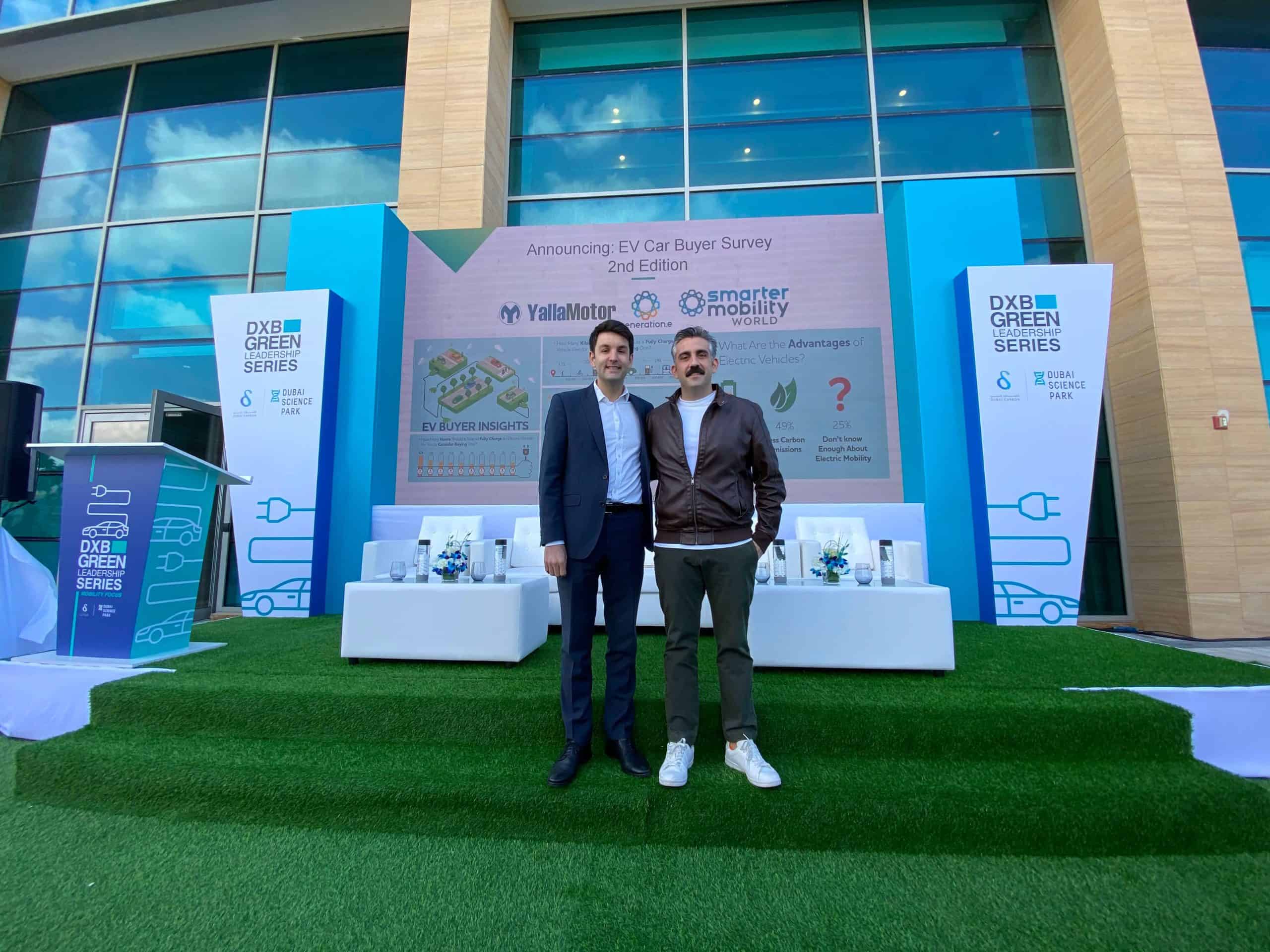 Generation.e and YallaMotor launch the region’s largest ever study to better understand the appetite for electric vehicles in the Middle East

Last year more than 3,800 people took part in the study, which is helping shine a light on what needs to be done to accelerate future adoption

January 2020, Dubai, United Arab Emirates: YallaMotor in partnership with Generation.e, has announced that it will be running the second Electric Vehicle Buyers Survey in the lead up to the highly anticipated Smarter Mobility World in March. The survey, which last year canvased the views of over 3,800 people in the GCC, is the largest survey ever to be conducted in the region to better understand the appetite for electric vehicles in the Middle East.

The announcement was made at the flagship DXB Green Leadership Series, hosted by Dubai Carbon Centre of Excellence (DCCE) and Dubai Science Park on Tuesday (21st January), during a keynote speech by Ben Pullen, Co-Founder & CEO at Generation.e, who discussed the growing appetite for electric vehicle adoption.

Last year’s survey, ran by the region’s largest automotive portal, YallaMotor in collaboration with Generation.e, shed considerable light on the pain points that potential buyers face when purchasing an electric vehicle. Highlights of the research revealed that whilst only eight per cent of people had ever driven a pure electric vehicle in the region, consumers were quick to identify some of the advantages of better fuel economy and reduced carbon emissions at 51% and 49% respectively.

Nevertheless, despite the excitement around electric vehicles, consumers are concerned about the long charging times (45%), the high initial cost of purchase (37%) and the inconvenient charging options (34%). On balance, however, the 2019 survey revealed that 44% of those in the GCC are likely or very likely to purchase an electric vehicle in the next two years. More interestingly, a considerable 61% will also opt to have it as their primary vehicle.

This year’s survey has been launched to identify whether perceptions have shifted further in light of global and regional efforts to accelerate the transition to electric and smarter mobility. The results of the latest study will be announced at Smarter Mobility World, the first event of its kind that will bring together thought leaders from business and government for a two-day summit, held at The Sustainable City on 24-25 March 2020.

Ben Pullen, Co-Founder & CEO at Generation.e, said: “As we see more and more of the world’s largest vehicle manufacturers launch their own electric vehicle models, we are entering an era where we can choose to travel more sustainably – in a way that we have never done before. With last year’s survey being the biggest of its kind ever to be delivered in the region, it has shown a clear appetite for electric vehicles. The opportunity for this market is sizable, and we are committed to working with thought leaders from businesses and governments around the world to accelerate towards a future of electric and smarter mobility.”

Jorge Bialade, General Manager at YallaMotor, added: “As the largest automotive platform in the region, we firmly believe that we have the responsibility to share this information with all stakeholders in order to build and open more discussions that effectively will accelerate the adoption of electric vehicles in the region. This will help the automotive industry to overcome challenges towards building a more sustainable future with more electric vehicles on the roads of the GCC. We are looking forward to seeing what the next survey results bring as we canvas the appetite for electric vehicle adoption in the region.”

A full line up of speakers have been announced at Smarter Mobility World, including leaders from Bloomberg New Energy Finance, One Moto, Best Mile, and eKar, with the event providing a packed agenda of workshops and roundtables where delegates will hear about new smarter mobility solutions and transport planning which have the potential to transform people’s lives.

To take part in the survey, please visit the following link:

Generation.e’s mission is to inspire transformation to smarter mobility for the creation of better connected and sustainable societies. This is done through their innovative Smarter Mobility Summits and exciting Electric Vehicle Road Trips. The summits primarily give space to industry and government for the exchange of information and ideas whilst the road trips engage the world with new technologies whilst demonstrating their capabilities.

More information can be found at https://generationehq.com/evrt-dubai/

A subsidiary of the Middle East’s leading job site Bayt.com, YallaMotor was launched in 2012 and has grown to become the most popular and trusted automotive portal in the region. With the aim of simplifying vehicle research, buying, and selling, it serves over 1,500,000 car buyers per month and carries up-to-date information for over seventy-five brands sold in the region.

Providing visitors to the site with the right set of tools to make a well-informed purchasing decision, it offers a dedicated Car Buyer’s Guide that lists prices, specs, and features for every model sold in the market, along with the latest international, regional and local car news and reviews from the region and beyond.

Bundle that with handy shopping tools such as a unique special offers section, an in-depth car comparison tool, and a bustling used car section with over 23,000 cars, and it’s easy to see why YallaMotor has become the region’s leading automotive portal.